In 1973, what is today known as Abakaliki Diocese was carved out of Ogoja Diocese and in September of the same year, Bishop Thomas McGettrick, a veteran missionary of St. Patrick’s Society who had been Bishop of Ogoja since 1955 was installed as its first Bishop. It should be recalled that in 1973 before the old Ogoja Diocese was divided, there were only 64 priests in the diocese. When the first native Bishop of Abakaliki, Bishop Michael Okoro, was ordained in 1977, the then Abakaliki province had taken a pedestal of autonomy. With the division in 1973, it had 21 senior seminarians and 57 junior seminarians.

However, the first attempt by Catholic Missionaries to penetrate areas now under Abakaliki Diocese dates back to 1914, when Father Francis Howell had a stop-over at Ndibe Beach in Afikpo in one of his tours. Negotiations with local opinion leaders led to the establishment of a school with Mr. J.J. Duke from Calabar was appointed its headmaster. But, the initial attempt to establish a mission at Afikpo was a gross failure. This was because, the local population feeling that the missionary teachings might threaten their customs and indigenous forms of worship, and perhaps corrupt their morality resisted the incursion of missionaries. Sadly, in 1916, the school at Ndibe was closed down.

But it is impossible to stop the promptings of the Holy Spirit because, when God closes one door, He usually opens another. Between 1916 and 1920, another attempt came from missionaries at Eke (near Enugu) to establish in Abakaliki Town. It is still remembered in this area how Father Davey of Eke Parish would ride on Motorcycle to Abakaliki on Sundays for his third mass, a distance of almost 100 kilometres!

Then came another missionary incursion into Ishiagu area of the Diocese between 1922 and 1923. At the request of the local chiefs, Fr. Grandin in-charge of Eke Parish sent one Mr. Marcel Okeke to open up a school and a church at Ishiagu. In February, 1925, sacrament of Baptism was administered to the first 25 converts by Fr. Davey. And later, in September of the same year, Bishop Shanahan conferred the sacrament of confirmation on them. It should be recalled that mission in Abakaliki was faced with a lot of challenges. Outside the cultural barriers, there was a scarcity of priests. Between 1930 and 1931, there was no priest in the present diocese of Ogoja and Abakaliki. In 1932, there were 8 priests in Ogoja and only 2 were in Abakaliki province.

Following the strategy adopted by Bishop Shanahan great emphasis was placed on evangelization through schools. By 1960, there were 178 Catholic Primary Schools in the Diocese. By 1967 (shortly before the state forcefully took over all mission schools) the numerical strength has gone up to 249 primary school with 38,820 boys and 12,120 girls. These were all baptized before or at schools. Because, the training of teachers was important since without trained teachers government would not assist schools, Teachers Training Colleges were opened together with secondary schools to absorb the products of the primary schools. They were as follows:

In the provision of health care services especially for lepers, hospitals, outstation clinics and leper settlements were established by the church through the help of Medical Missionary sisters. The feat achieved by the church here has not been rivalled by any other religious or charitable organization. Since 1946, over 20,000 patients have been cured and discharged from these leprosy centres. In 1942, Mater Misericordiae Hospital was opened in Afikpo as a general and maternity hospital. School of general nursing and midwifery was later attached to it in 1952. Two other hospitals were later established in the diocese: Mile Four Hospital, Abakaliki (1948) and St. Vincent’s Hospital. Ndubia (in 1963).

Still on health, outside the leper settlement established at Mile Four Abakaliki in 1946, other leper colonies were opened at Ngbo, Effium, Ezillo, Ikwo and Izzi. Again, since 1978, the church has launched a new campaign in family planning and a concerted effort was put to teach Ovulation Method (O.M) in different hospitals run by the church.

With the retirement of Late Bishop Thomas McGettrick in June 1983, Bishop Michael Okoro was installed as a residential Bishop on November 27, 1983, Six years after his Episcopal ordination. He began presiding over a diocese that had 144,000 Catholics out of a total population of 1,240,000, some 17,000 Catechumens, 22 parishes, 3 hospitals, one leprosy centre, one monastery and ten marriage training centres. As a result, the Diocese was poised to begin consolidating the faith which it had inherited from its missionary ancestors. Still faithful to the tested tradition of his predecessors  of evangelizing through schools  Bishop Okoro opened a good number of secondary, primary and nursery schools in the diocese. Recently, a school aimed at catechizing the catechizers who would assist the priests in instructing the faithful was opened.

Today, Bishop Okoro presides over a diocese that has over 600,000 Catholics made up of 178 Parishes and ten chaplaincies out of a population of inhabitants of Ebonyi State. The Pastoral Centre (Bishop Thomas McGettrick Memorial) recently completed stands out as one of the best in Africa. To ensure the easy dissemination of the gospel, the Bishop has been able to establish a Printing Press with an Ultra-Modern Studio. The press sees to the publication of her annual Directory/Liturgical Calendar and the weekly Alpha Citizens’ Advocate Newspaper. 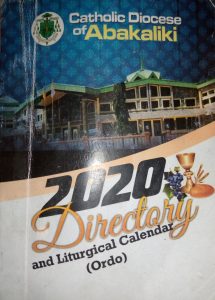 Need Help? Chat with us
Start a Conversation
Hi! Click one of our member below to chat on Whatsapp
The team typically replies in a few minutes.
Fr. Henry Ogodo
Director